Make 4 interest-free payments of $75.00 fortnightly and receive your order now.

Long ago in the Dreamtime, the animals were very much bigger than they are today and the bite of a snake was not poisonous but a bite of a goanna was.

Mungoon-gali was a large goanna and because of his poisonous bite was quite a terror of the land.  His favourite food was the flesh of blackfellas whom he used to devour in numbers.  He wrought such havoc that all the other tribes held a meeting as they feared that Mungoon-gali would soon exterminate the blackfellas if something were not done to stop him.  Ooyu-bu-lui the black snake spoke up and said that he could but they only laughed. Ooyu-bu-lui told them that by the time Yhi the sun has gone to her rest the next day, he shall have the poison bag of Mungoon-gali and promptly glided away.

Since then, snakes have been poisonous and not goannas and they never meet now without fighting.  But the poison bag is powerless to harm the goannas as Mungoon-gali, a great Wirinun, knew of a plant which, if eaten after a snakebite, made the poison powerless to kill or injure.  As soon as a goanna is bitten by a snake, he rushes to this plant and eating it, is saved from any evil consequences of the bite.

This antidote has ever since been the secret of the goanna tribe left in their possession by Mungoon-gali who lost his poison bag by the cunning of Ooyu-bu-lui, the black snake.

About the Artist
Michael Connolly is an Aboriginal from Charleville, south west Queensland and a descendant of the KullillI Tribe from the Thargomindah and Eulo region on his Father's side and from the Muruwari People from Goodooga and Brewarrina region of north-west New South Wales on his Mother's side who can trace their traditional trade and diplomatic links with Central Desert as well as South Australian and Northern New South Wales' Aboriginal Communities. With this rich Indigenous background and a unique way of interpreting his cultural heritage Michael is able to represent a unique perspective in the visual and performing arts that informs his significant work in cross cultural contexts

NOTE TO CUSTOMER:  This is original authentic Aboriginal Art handpainted by an Australian Aborignal Artist - each dot and stroke on this canvas has a cultural link that goes back to the First Time and an ancient story embedded especially for you.  Buying from the original artist/Dreamtime Kullilla-Art guarantees this 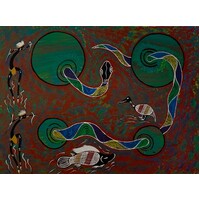 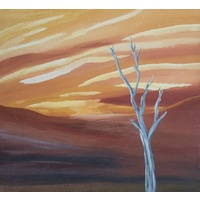